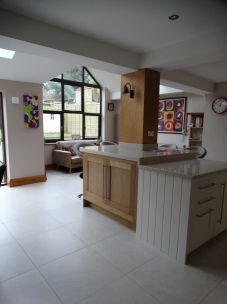 The owners of this detached South Gloucestershire detached house had previously had a one storey extension to their kitchen. The extension provided a small play/seating area, which was linked to their kitchen/diner, but they found then area too disjointed, and the kitchen too small.

Before- with existing extension

The existing extension was a great space, with a large window in the gable end, and rooflights, but the arrangement didn’t quite work. ACHD designed a one storey extension to the remaining rear elevation, extending the kitchen and dining area, and allowing the original extension to be opened out into the space.

The lean to extension intersects with the original extension, and incorporates new rooflights, and large sliding doors. 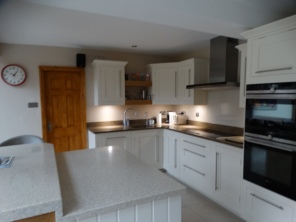 The new kitchen was re-positioned, and includes a large island area, cleverly designed around a structural pillar. The island creates a social hub for the kitchen, and an informal eating area.

The original extension is opened up into newly extended space, allowing the dramatic gable window to be more easily seen, and the light and view of the garden it creates, to be enjoyed from the whole room. The study has also been extended, to allow the owner’s children a play/study area, in addition to the existing home office.

This site uses Akismet to reduce spam. Learn how your comment data is processed.

Working throughout Bristol, Bath, South Gloucestershire and the surrounding areas